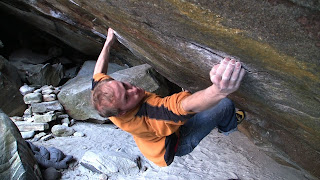 
This fall I was on a trip to the tecino region in Switzerland with a lot of good friends. Started the trip in Magic wood where I joined Andreas, Janne, Øystein and the finish crew with Kuuti, Roosa and Jarkko.  The first day started of with rain so we moved on to brione with Andrew, Adam and Max in hope of better weather. The first day we went for the frogger block and tried the dry parts of fake pamplemousse 8A and Ganymede takeover hard 8A+. Ganymede felt well so went over next day to see if it was dry and give it a try.  This problem is 70 degrees steep on sharp small crimps, so sharp that you cant have more than a couple of tries a day if you don’t want to destroy your skin. In the third try I climbed through the crux and was ready for the last move that is kind of an all of celebrations jump to a jug as seen below. 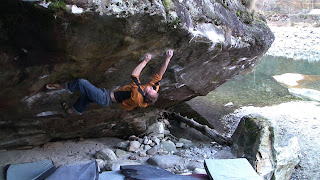 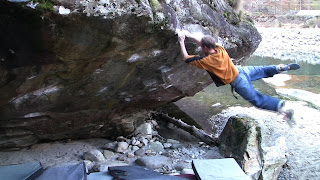 This is actually not that hard move, but I some hove managed to fall of because I got so surprised of the extra speed I got when the heel went out so I hit the hold 10 cm to the right where it is just a slooper. So instead of sweet success I ended the flight a couple of metres away in between some rocks far away from the pads totally pissed. Luckily I didn’t injure anything. The next days I was falling of the move to where you do the jump move from every try, quite frustrating! In between the tries on Ganymede I did some others nice problem like frogger, pøbler (nice 8A put up by Torstein Eide left of vecchia leone), the black arêtes and the two nice classic arêtes in the meadow. 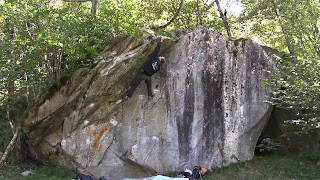 
After some days I went back to Magic woods with the Finnish crew in hope of good conditions. Magic started good with quick repeats of right hand of darkness and UG2 before a frustrating fight with left hand of darkness 8A+ started. This problem is in a big roof and climbs out to the sun on small crimps; it shares the start crux with right hand but then follows a more direct line in the centre of the roof through a second crux before an easy top out. The same day as I did right hand I managed to give it a last good try when I was completely wasted and fighted me thru all the way to the top out but was a bit unfocused for a moment and the foot slipped of and I was at the ground again. was actually not that mad then because it was a rally good try and i felt the problem would go easily next day. But the next days i was making stupied mistakes on evry try, putting the heel wrong, wrong body position and actually falling of the easy top out because of silly mistake some more days. Fuck!!