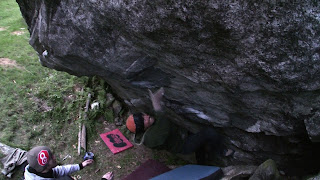 After some time in Magic Steffen arrived with his new car and was ready for some action. He quickly made his way thru right hand of darkness and octopussy 8A, and showed that his skills are still developing. Been on several trips with him the last two years and the development from being a 7b bouldrer to now doing 8s have goon quite fast. After a total of two weeks in magic the snow was coming and we went back to areas in lower altitude. The plan was going to brione and stay there for some time, I was really keen on coming back for ganyemede and both me and kuutti was eager on a new date with amber. On the way to brione we stooped at Andreas and Jannes place who had returned from Fontainebleau. After a warm shower and starting to get some heat in ours frozen bodies we decided to sleep over there for a night before we was heading up for the tent life in brione. In the end we wasn’t able to leave the comfort and stayed in the apartment for the rest of the trip. Since the apartment was quiet close to chironico compared to brione the climbing plan changed a bit, but chironico with its density of hard nice problems surrounded with a lot of easier nice warm ups makes it one of my favourite spot, so the adjusting in plans wasn’t that big a problem;-). 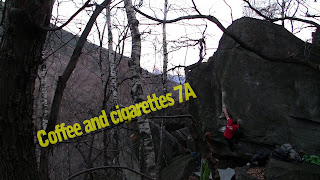 We still had some day trips up to brione so I had my chance to finish up ganyemede. Luckily I did it the last day before me and Steffen jumped in to the car heading home for Norway.

This problem was originally rated 8B+ but with a new sequence it went down to 8B but at the moment it seems like it settled at 8A+, in my opinion it is defiantly the hardest 8a+ vie done in Swiss but I still think 8a+ is right. It’s a problem that suite light people because of the tiny crimps so I am really happy to have sent this one. 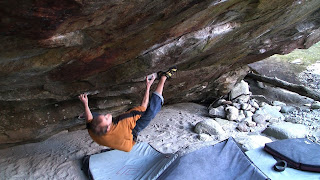 A really cool roof problem where the start move is the crux, followed by some easier moves before a hard dead point move from a two finger crimp and then some easier crimping to the top.

Weird compression boulder at vertical flat features. One of the last move is the crux, felt impossible until I suddenly was at the top confused over that I had done the crux for the first time on my first try from the start.

Cool steep problem put up by Nalle one year ago. Long moves on a bit to sharp edges (skin killer, more easy 7C+ than 8A)

Maby the most classic line in brione, in my opinion it looks much better than it climbs (a bit juggy) with its beautiful orange/red colours. Fell of the top a couple of time 2 years ago,  first try this year. I don’t think this is an 8A as a lot of people put it as.

Nice beach block with river polished cool holds, the first couple of meters of the boulder are the deal but the high finish with fall potential in to the river makes your heart beating.

The name says it all, tricky funky 360 toe hook madness. Like a circus.

Nice, but a bit contrived crimpy line put up by mr Nicole himself back in the days, cool moves with a crucial heel hook. Felt really easy for me, more like 7c but with the rest of the group sending it fast as well agreed on 7c+. To me it feels kind of strange that everyone else agree with the guide book and grades this one 8A(or maybe its only me that has misunderstood the grading system and sandbags heavily back in Bergen)

Cool moves but kind of low ball, 8A in guide as well 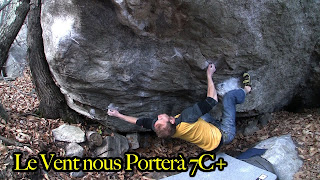 Cool pumpy problem put up by Torstein, kind of cool to climb on classic abroad that is put up by Norwegian fellows. 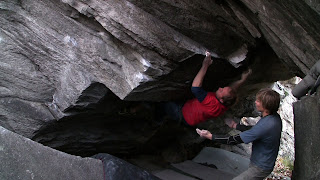 Painful one finger crimp but rest is cool

Right hand of darkness 8A

Steep roof problem on crimps. Starts on a jug, than a long move to a two finger crimp for your right hand, than a left heel hook and into a two finger pocket with your left hand and than a easier dynamic move with your right into a jug, than 7Aish crimping to the top. On this problem I found out that I sucks on pockets. I wasn’t able to pull at all on this two-finger pocket and had to change beta right away, the other ones thought this was one of the easier moves and thought that if you was able to get the fingers into the pocket the problem was done. I ended up with a really hard lock off move to a small crimp 30 cm further out than the pocket and had to do the next move to the jug static otherwise I would dab. In all I felt this problem with my silly method was solid and I now for sure that the two finger open hand strength has to be trained. 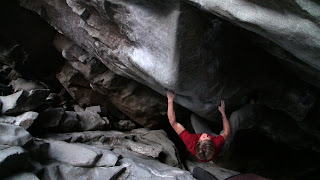 Steep compression problem, all about the wetness!

All in all quite happy with this trip, first trip for a long time without being injured or sick.

Was quite unsure about the shape before the trip since I haven’t climbed that much this year, and mainly doing hang boarding because of the accident in the start of the year and a lot of offshore jobs. So the fingers was defiantly in form and made me do some of my projects. But imp a bit annoyed that I often did silly mistakes that made me fall of when I wasn’t supposed to. All in all I actually had 9 days in total on ganyemede takeover and left hand of darkness after I really should have done them. Could have used these days instead on other project an the fact that I didn’t sent left hand really piss me, since I in the end had several falls past the last crux on easy 5+ climbing. Somehow it felt like the mental wasn’t on the top, but the fact that I did 4 of my projects the last week and was able to do ganyemede on the last chance last day proves (I hope at least so) that I in the end was able to put my mind together.

Its kind a nice as well to explore things that your not that good at so you now what to train more on in the future.

In the end I want to say that imp really pleased to get to know new friends on trips, like the Finnish one that imp already planning new trips with for the next year.